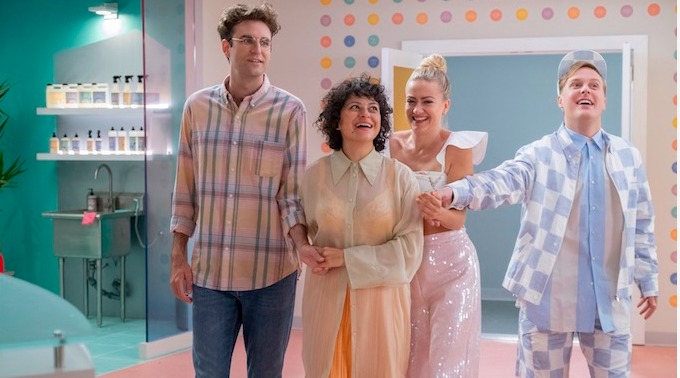 Search party season 5 is a wild experiment from the search party. Search Party, an American dark comedy series, concluded its fifth and final season on January 7, 2022, with a broadcast on HBO Max. A total of ten episodes, each lasting about 25 minutes, make up the season. She leads her sect, working with Jeff Goldblum’s character as a tech mogul to create an enlightenment pill. Elliott is on the lookout for a medication that would help him keep tabs on his restless adopted son. This article will discuss more search party season 5, release date, cast, and plot.

What is Search Party?

“Search Party” has become a cult favorite. On Rotten Tomatoes, the series presently holds a 96 percent approval rating from critics. Ranking the best and worst episodes of “Search Party” is problematic because even the so-called “less than stellar” episodes are still well-ranked on IMDb. As the title suggests, the show follows a bunch of aimless twenties who decide to take up the hobby of solving crimes to pass the time.

Season 2’s coverup begins as soon as the season does. Covering up a murder strains on your soul and your relationships, as you’ve found out the hard way. As Drew’s neighbor April begins blackmailing the group by saying she knows everything, paranoia emerges. On the Staten Island Ferry, she confronts Dory and threatens to follow her and her companions forever. Dory kills her in a fit of wrath by pushing her over the edge.

As Drew and Dory stand trial for Keith’s murder, the third season takes on a courtroom drama feel. Elliot decides to sell to a right-wing news network to get his hands on some considerable money. Portia is wracked with remorse about her role in securing Dory and Drew’s immunity by testifying against them. On the day of the verdict, Portia shows up to support her friends, having been kidnapped by an infatuated fan. Drew and Dory are exonerated, but their bonds are irreversibly broken.

Ship Wreck, the fan who tried to kidnap Portia in Season 3, now kidnapped Dory in Season 4. They all go their separate ways, furious with Dory’s ex-friend, believing she has abandoned them. Portia has landed the role of Dory in a biopic, and Drew has taken refuge in a theme park far from New York City. Her friends get together once more to determine whether or not she is in grave danger.

To save her, they must find out where she is first. At the season’s conclusion, Dory is found dead in a fire, and all of her prior incarnations attend her funeral. However, she is resurrected in the last seconds of the season.

Dory finds up in a psychiatric facility after her near-death experience because she thinks she was enlightened by said near-death encounter. When Dory is free to exit the hospital, she decides to seek out and forgive her pals. Thanks to Instagram Live, she has become a global sensation and cult-like fixation with online followers. Tunnel Quinn, a tech tycoon, provides cash for Dory to organize a team of scientists to manufacture a medication called “LYTE.”

Happiness in pill form will deliver the world what it needs most. An experimental group of followers is formed to learn Dory’s message and spread it to the world via a large social media audience. This decision was made by Tik Tok scientific disciple Benny when she had a peculiar reaction to the pill sample. After reconciling with their ex, Elliott and Marc have decided to adopt a child. Aspen John Waters, who looks like a Care Bear, joins them from a boutique adoption agency run by Sheffield John Waters. A broken spirit, Chantal has been influenced by Liquorice Montague.

Chantal Witherbottom as they flee Brooklyn:

They are saved at the last minute by Chantal Witherbottom as they flee Brooklyn, which zombies have now overtaken. The first season may have been worth it after all. The only problem is that both Chantal and Dory claim responsibility for the devastation, demonstrating that neither has learned anything from this experience. Despite the apocalypse’s looming, it’s all about the likes. The globe has entered a post-apocalyptic era and is now ruled by a dystopian government. In a secure zone provided by the government, Drew and Dory have married.

While Dory glanced at the flier of Chantal in the first episode of the series, the series concludes with her staring at a missing person’s board. It’s hard to tell if this was all Dory’s imagination. Is she dead at the end of Season 4, or was she only injured? She may have caused the zombie apocalypse. We’re left to speculate what will happen next. It’s all about horror, cult documentary, Q-Anon, and influencers in this season’s offerings.

At the beginning of 2021, there were many reasons for fans of the comedic thriller to celebrate. After a 10-episode run, “Search Party” Season 4 premiered on January 14, 2021, and ended on January 28. It was fortunate that we didn’t have to worry about the show’s future for too long after Season 4.

How many episodes are in search party season 5?

After months of speculation, we finally know the release date of HBO Max’s classic comedy series. The fifth and final season will have ten episodes, just like Season 4 did. However, unlike Season 4, Season 5 will not be broken up into multiple installments over a month. We’ll be able to watch all ten episodes in one sitting because they’ll all be available on the same day.

A cast of search party season 5:

“Search Party” revolves around a group of college pals who set out to find a long-lost friend and twists and turns. Warner Media has stated that the group above of pals will return for the show’s concluding season. This group has main characters. Dory Sief, Derek Hagner’s Portia Davenport, and Elliot Goss. Guests from previous seasons, Jeffery Self and Clare McNulty, will return for Season 5.

Every season had a different theme and took the group to new and exciting locations. We were never quite sure what to expect from it in any event. As a result, they created an excellent satire on so many current topics because they were never hesitant to take risks. It’s plausible that these self-absorbed creatures may bring about the end of the planet because of their inability to learn from their mistakes and evolve as people.

What time does the fifth season of Search Party premiere?

Search party season 5, an American dark comedy series, concluded its fifth and final season on January 7, 2022, with a broadcast on HBO Max. A total of ten episodes, each lasting about 25 minutes, make up the season.

Is this the final season of Search Party?

Search party season 5, When it premiered its fifth and final season, all ten episodes were available to view on Netflix in January; Search Party went out with a bang.