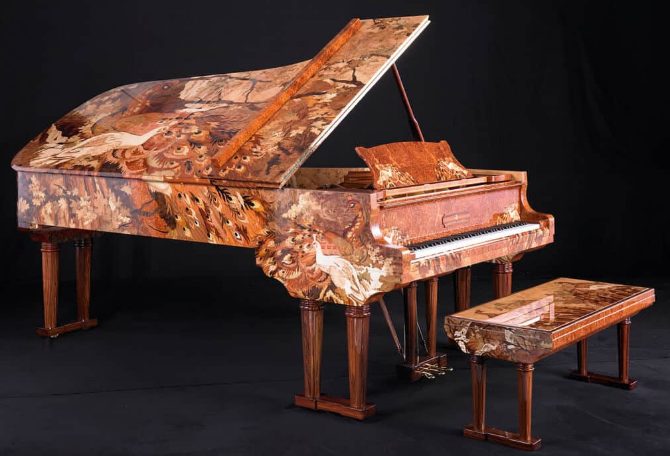 Most expensive piano brands included C.Bechstein, Bluthner, Bosendorfer, etc. There are millions of musical instruments in existence. Piano, guitar, violin, saxophone, drums, flute, clarinet, cello, trumpet, and more are among the most often played. So, what’s your favorite instrument to play? Most individuals pick up the skills necessary to play such instruments throughout their formal education, which has been shown to hasten cognitive maturation. Due to the widespread belief among music teachers that piano proficiency is essential before attempting to study any other instrument, many families and children make that decision. There is a list of some most expensive piano brands.

it is one of the most expensive piano brands. C. Bechstein pianos have been manufactured in Germany since 1853. The C. Bechstein lines are the higher-end options, while the Bechstein series is the more budget-friendly ones under this name. Bechstein parts are produced in the Czech Republic to save money, despite the company’s claims that production for both lines occurs in Germany. The cabinetry of the C. Bechstein is more modern and elegant than that of the B series. A royal hand-rubbed finish improved sound quality, and sophisticated mechanisms make this a high-priced series.

Since 1853, German manufacturers have been producing high-quality pianos like this. They offer a more inviting, romantic, and lyrical tone than their German contemporaries. They offer a light yet responsive action, a polished style, and a subtle personality thanks to their outstanding sustain at low volumes. Regarding quality and business ethos, Bluthner pianos are consistently considered among the finest in the industry. Bluthner’s ambitious, translucent piano is called the lucid piano.

In 1828, Austrian piano manufacturer Ignaz Bosendorfer opened a shop in Vienna. Bosendorfer pianos gained popularity thanks to Franz Liszt, who advocated for them. In reality, this establishment was designated Austria’s official piano producer in 1830. In particular, the Imperial Grand model stands out for its unique appearance and sound. There is more than 9’6″ playing space, 8 octaves, and 97 keys on the concert grand piano. In addition to Bartok, Busoni, Ravel, and Debussy, many more composers have used the instrument’s lower register.

An engineer and concert pianist, Paolo Fazioli started researching and honing pianos in 1978 to deliver the finest instrument. Due to its unblemished reputation for performance quality, extensive customizing options, and dependability, the brand has a massive following among pianists. Concerts, tournaments, and individual practice time are just some of the uses for these instruments.

Founders Friedrich Grotrian and Carl Friedrich Theodor Steinweg first introduced their product in 1853. The piano factory has been around for a long time and has changed ownership many times. After relocating from Seesen, Germany, to the United States in 1850, Heinrich Steinweg founded Steinway & Sons. Theodor Steinweg, son of Friedrich, first went into business with Friedrich but eventually sold out to Wilhelm Grotrian, son of Friedrich. The Grotrian family ran the company for many years until 2015 when the Hong Kong-based Parsons Music Group acquired a sizable share. But Grotrian is still made in Braunschweig, Germany.

As was previously noted, Steinway & Sons were established in 1853 by Heinrich Engelhardt Steinweg, Theodor Steinweg’s father. Steinway’s inventions improved the grand piano, including sound, action, and frame. As a result, several companies have copied his designs. The crew has been faithful to the founder’s ideals through all generations. The sound of a Steinway piano is universally recognized as the sound of the American piano, with a robust bass, a treble with tonal richness, and a deep middle.

Ulrich Sauter, who grew up in Spaichingen, Germany, now heads the family business building pianos since 1819 under the Sauter name. High-quality woods, including yew, pyramid mahogany, burl walnut, and ebony, craft the instrument’s structural and sonic components. At its plant at the foot of the Alps, the Sauter company can produce as many as 120 grand pianos and 800 verticals annually. There is a great deal of diversity in the look and feel of its pianos.

This post will look at the most expensive piano brands and valuable artworks worldwide. With their impeccable track records, decades of industry expertise, and groundbreaking designs, Bluthner, Steinway, and Fazioli command a sizable portion of the luxury market. Still, other established names in the industry are driven by a passion for innovation, and they bring to market several innovative baby grand pianos and concert grand pianos every year.

Why do Steinway pianos cost so much more?

Steinway pianos range widely in price, the most significant difference being the instrument’s total size.

To what extent do pianos vary in quality?

Pianos may be graded as high as an 8. You need to play the instrument with precision and finesse and have a high level of technical proficiency.