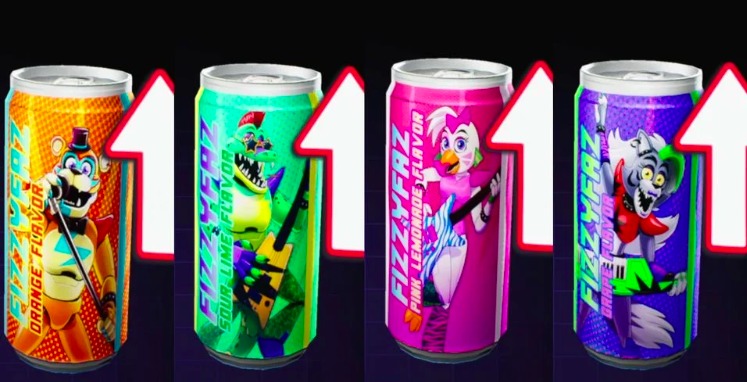 Fizzy Faz is a high-energy drink in the FNAF Security Breach. Stamina boosters can be located in various locations and increase the player’s stamina. The cans of the flavour of Fizzy Faz that symbolize each band member’s colour scheme are depicted on the cans of the flavour they represent. There are four Fizzy Faz objects hidden throughout the Pizzaplex, all within easy reach. Security Breach’s best upgrade, Fizzy Faz, gives players an even better chance of making it out of the mall while working with Freddy Fazbear to unravel some of the mall’s mysteries. This article will discuss fizzy faz and how to get fizzy Faz in FNAF.

Where do you find Fizzy Faz’s stamina upgrades?

Freddy Fazbear’s Mega Pizzaplex is a free-roaming environment that lets players explore the complex as a bit of child named Gregory, who has been confined inside after-hours. Animatronics, security bots, and the mysterious Vanny must all be avoided by Gregory if he is to make it through till daylight in this vast structure; thus, his agility and stamina are critical. Gregory’s stamina is considerably increased with each can of Fizzy Faz that the player discovers, allowing him to sprint for more extended periods and faster as the player goes through the FNAF Pizzaplex.

Each of the Pizzaplex’s Glamrock animatronics has its flavour for four in the game. With Fizzy Faz in hand, Gregory has a leg up on his pursuers as they rampage through the shopping centre, making it much easier for him to survive the night. Since players may no longer save beyond 6 a.m., the stamina boost makes post-game content in FNAF Security Breach easier. Fizzy Faz is hidden in collector presents across the complex. Finding all four at once can be difficult.

While exploring FNAF Security Breach, players can get the “Sugar High” reward by discovering three of the four energy drinks hidden throughout. You should know that getting all four beverages without glitching or destroying your save file is quite challenging. Thus this achievement requires three. After beating the game, players can only earn all four of the Fizzy Faz beverages by staying in the mall past 6 a.m. to complete the collection.

If the Prize Counter task is completed instead of the Loading Dock mission, players will be unable to obtain this can of Fizzy Faz within the same playthrough.  Monty’s Fizzy Faz – Information about the FNAFAs Prize Counter quest requires players to visit El Chip’s restaurant on the Atrium’s third floor. Under the restaurant’s cash counter is a blue kitchen entrance. The stove has a can of Monty’s Fizzy Faz on it, just past the Flashlight Recharging Station.

These unusual stamina boosters are called Fizzy Faz. Each Fizzy Faz boosts your stamina, how quickly you recover from exhaustion, and your sprinting speed. “That’s the impression I get. I’m not sure what Stamina improvements do precisely, but I do know that they improve your sprinting. It is what matters.

Enter the Level 2 Security Door on the right after exiting the central ticket gates. You’ll get a Chica Fizzy Faz and a note in your gift. The Glamrock Gifts store can be found to the south of this location.

The El Chip restaurant is located on the 3rd floor of the Atrium 3F. To find the gift, you must go into the kitchen. It is the most straightforward improvement in the early stages of the game.

Make your way westwards through the catwalks in Loading Dock to get to the Security Office. This passage will lead you to the catwalks, patrolled by a swarm of robot guards. Enter the left door at the end of the hallway. An abandoned control room has a gift box.

On the east side of the Raceway’s central section, find the Hardhat Construction Area. You’ll locate a Save Station and a memo bag near the back of the construction zone. The upgraded present may be found through the adjoining catwalk stairwell.

Upon entering, Roxy’s Fizzy Faz will be waiting, and if players have already collected the other two cans of Fizzy Faz, they will also unlock the Sugar High accomplishment. After Chica or Monty have been decommissioned, and their parts have been used to enhance Freddy, the final can of Fizzy Faz in FNAF Security Breach can only be collected after 5 a.m. A small piece of the catwalk to the right of the area’s save point is accessible via a pair of steps.

Is there a breach of security with Vanny Vanessa?

Suppose you manage to obtain every piece of memorabilia through a security breach?

There are numerous small gift boxes with cranks throughout Security Breach. A pause screen inventory shows all the collectables, upgrades, and other important stuff found in these gift boxes.

Is the FAZ’s fizziness beneficial?

FNAF Security Breach has a series of items known as Fizzy Faz. Stamina boosters can be located in various locations and increase the player’s stamina.