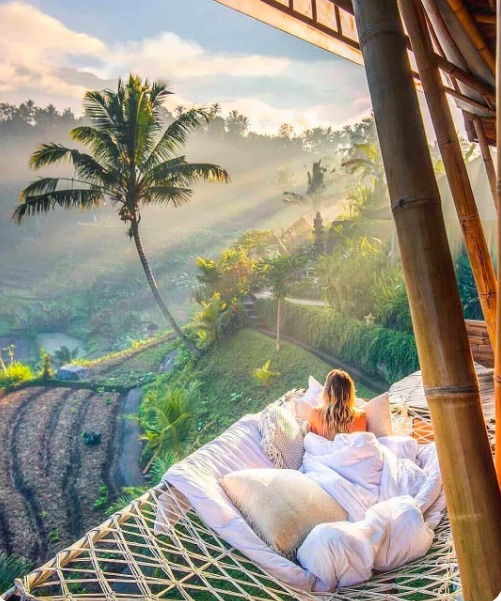 The Maldives is an archipelagic state and a picturesque island nation in Asia and the Indian Ocean. About 700 miles away from the mainland, it is a little island. The Maldives are an archipelago of more than 1,000 islands distinguished by their sugar-white sand beaches, vibrant coral reefs, and tropical species. Aside from water sports like parasailing, surfing, and fishing, there are many other activities you may partake in a while vacationing in this tropical paradise.

With so many mysteries yet to be unearthed, Petra has been included in the top five most exotic destinations to visit in the world. Jordan’s city of Petra is one of the world’s seven new wonders. The red sandstone cliffs behind the city make it known as the “Rose City” or “Red-Rose City” because of the exquisite carvings. Around 300 BC, Petra served as the capital of the Nabatean Kingdom. Visitors are welcome to explore the sand-covered site’s numerous tombs, temples, and sculpted buildings.

Central Turkey’s Cappadocia region is famous for its fairytale beauty and cave houses. Volcanic eruptions over the millennia shaped this lunar terrain, but thousands of years ago, inhabitants added their additions. They hollowed out homes, churches, and underground cities from the softer rock than the surrounding surface. In the Cappadocia region, there are hundreds of underground dwellings. Kaymakli, which has eight floors, and Derinkuyu, which drops 55 meters, are two of the most popular attractions in Turkey.

In Bali, “heaven” and “paradise” go hand-in-hand. It’s no secret that the island of Bali has some of the world’s best beaches, clubs, scenery, and infinity pools. If you’re looking to rest and unwind, the country’s resorts are among the greatest in Asia. Surfing lessons, woodland exploration, wildlife viewing, historic temple visits, and beach scouting are just a few of the many options available. If you’re looking for an all-inclusive holiday, Bali has all amazing value vacation packages and Costa Rica trips year-round.

Fiji is an idyllic archipelago/country in the South Pacific, 2,100 miles north of Auckland, New Zealand, and encircles the Koro Sea. Only two of Fiji’s 333 islands, Viti Levu and Vanua Levu, are home to more than 80% of the people. Fiji is a great destination for scuba diving or snorkelling since it has more than 4000 square kilometres of beautiful coral reefs to explore. In the Nausori Highlands, there is a garden known as the Garden of the Sleeping Giant, home to an impressive variety of orchids and other native flora.

In the past, Tulum was a peaceful fishing village, but today it is one of Mexico’s most popular tourist destinations! Tulum’s beaches and weather are legendary, so the first thing you should do is take advantage of them for a relaxed day at the beach. Playa Paraiso, Playa Ruinas, Akumal Beach, and Las Palmas Public Beach are some of the nicest beaches in this area.

Mauritius is an island in the Indian Ocean known for its stunning beaches, tropical rainforests, waterfalls, lagoons, and coral reefs. As the largest waterfall in Mauritius and for its seven-coloured earth, Chamarel has become the most popular natural sight in the country. It’s also worth mentioning the Curious Corner of Chamarel, a museum filled with mirror-mazes, puzzle-solving, and optical illusion displays. This one is the best exotic place to travel.

The Urak Lawai, a group of indigenous Malay people living on the island of Ko Lipe in the Andaman Sea, calls it home. Despite its modest size, the island of Ko Lipe is jam-packed with things to do, a place to see, things to eat, and everything else you could want from an exotic vacation. On these beaches, you can snorkel or scuba dive to see the tropical species and coral reefs of Ko Lipe Island. There are also many Thai massage parlours and yoga and medicine workshops on the island.

The Palawan Archipelago is already in Mimaropa. This year’s “New 7 Wonders of Nature” include the Underground Water in Puerto Princesa, Palawan. Explore the stalactites and stalagmites of the caves on a river excursion while you’re there. Tubbataha Reefs Natural Park, a diver’s paradise, is another must-see.   Since it contains about half of the world’s coral species, more than 600 fish species, and a wide variety of whales, sharks, and dolphins, it has been designated a UNESCO World Heritage Site by the United Nations.

Aruba, a Dutch island in the Caribbean, is known for its year-round sunshine; in fact, Aruba has the most days of sunshine of any Caribbean island. Aruba is also known for its golden beaches, busy nightlife, opulent resorts, and excellent hotels. Aruba’s beaches include Hadicurari, Manchebo, Eagle, Boca Catalina, and Palm Beach. The Aruba Donkey Sanctuary, the Butterfly Farm, and the Hyatt Regency Aruba Casino are all worth a visit, as is the Arikok National Park with its great hikes and the Aruba Donkey Sanctuary.

The Seychelles archipelago consists of 115 islands in the Indian Ocean, making it one of the most beautiful places on Earth. The beautiful beaches of Seychelles are a never-ending source of pleasure for anybody who visits. Anse Lazio and Petite Anse, Georgette Beach and Beau Vallon Beach on St. Maarten are exotic places to travel to hire a kayak or stand up paddleboard.

Gili Ocean Swings, which can be found across the island, are one of the most popular and beautiful things to do at sunset. You can enjoy a day at the beach at Villa Almarik, Sunset, Malibu, or the Good Heart Beach while you’re in the area. Snorkelling and diving on the island will allow you to see many tropical fish and sea turtles in their natural habitat.  In addition, the Gili Trawangan Night Market is the best and most affordable location for dining and shopping.

The Malagasy language is known as Tsingy, which translates to “the spot where one cannot walk. Despite its eerie reputation, the location is fascinating to exotic places to travel. Magical formations predate people on this planet by a considerable stretch of the imagination. For the past 200 million years, strong tropical rains have eroded them. Plant and animal species unique to the Forest of Knives can be found across the area. Species of endangered lemurs and endemic reptiles, amphibians, and rodents can be seen frolicking around limestone needles.

The Amer Fort, which is also known as the Amber Fort, is a magnificent edifice in the Indian state of Rajasthan. It is a UNESCO World Heritage Site because of its sprawling location on top of a hill and the fort’s impressive combination of diverse cultures. At first, it was created as a defence against invading hordes. A palace maze encircles this beautiful fort. The fort’s architecture has Mughal and Hindu elements. It is also one of the top exotic places to travel.

With so many mysteries yet to be unearthed, Petra has been included in the top five most exotic destinations to visit in the world. Jordan’s city of Petra is one of the world’s seven new wonders. The red sandstone cliffs behind the city make it known as the “Rose City” or “Red-Rose City” because of the exquisite carvings. Around 300 BC, Petra served as the capital of the Nabatean Kingdom. Visitors are welcome to explore the sand-covered site’s numerous tombs, temples, and sculpted buildings.

Central Turkey’s Cappadocia region is famous for its fairytale beauty and cave houses. Volcanic eruptions over the millennia shaped this lunar terrain, but thousands of years ago, inhabitants added their additions to exotic places to travel. They hollowed out homes, churches, and underground cities from the softer rock than the surrounding surface. In the Cappadocia region, there are hundreds of underground dwellings. Kaymakli, which has eight floors, and Derinkuyu, which drops 55 meters, are two of the most popular attractions in Turkey.

It’s one of those less-travelled spots where you can get a great deal on nice weather, sunshine, and beaches while paying only $40 or so a night for lodging. Travel expenses are higher due to lesser demand, but unlike renowned tourist destinations like Cancun, you save money and avoid the tourist crush. It is a nine-island archipelago in the northern Caribbean noted for great scuba diving and surfing. It is also one of the top exotic places to travel.

The island of Roatan, in Honduras, is a popular tourist destination. Roatan, an island off the coast of Honduras, is a bargain-priced paradise in the Bay Islands. For $300 per week, you can rent a condo or apartment near the beach. To see capuchin monkeys and macaws in the wild, you can use either zipline through a forest canopy or visit a jungle.

For less than $50 a night, you can stay in a vacation rental or a hotel room in Crete and take advantage of the great Cretan cuisine and inexpensive activities. In addition, the island’s huge transportation system is inexpensive and convenient, and many of the attractions, such as the island’s pink sand beaches, mountains with gorgeous trails, and ancient buildings, are all free to explore. One of Crete’s most popular attractions, Samaria Gorge, can be explored and parked to the sea for just a €5 cost.

Compared to other Caribbean islands, the Bahamas can be reached quickly and affordably from Florida. For as little as $300 round-trip, you can get here from major east coast airports and enjoy a variety of water sports like snorkelling, fishing, sailing and windsurfing on an exotic island. You may swim alongside cute pigs in the water in areas like Exuma.

Exotic places to travel are the best way to get away from the monotony of daily life and recharge your batteries. Aside from breathtaking scenery, wildlife, views, and beaches, you’ll learn about other cultures, history, cuisine, and activities that will change your life forever. The places mentioned above are just a few of the most exotic spots globally, and visiting any one of them would provide you with the exhilaration and desire you exotic places to travel.

Is Hawaii an exotic location?

What is an exotic place?

A product or service must come from a foreign country or have some connection to one.