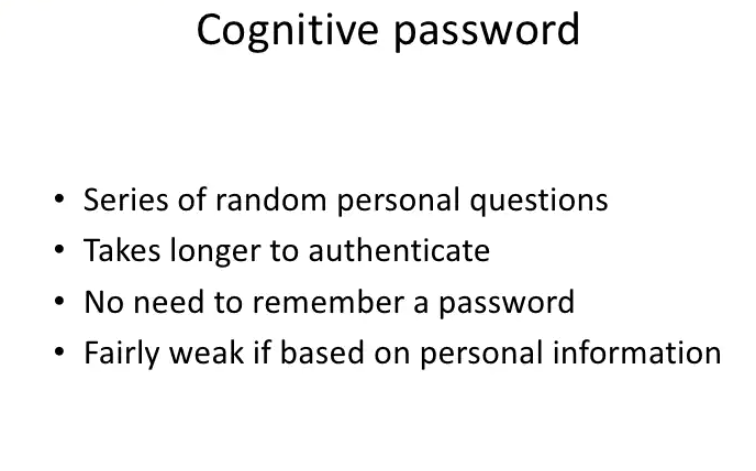 A cognitive password, knowledge-based authentication relies on the user answering a question they already know the answer to verify their identity. Cognitive password systems have been investigated for many years and are now extensively used as a secondary access mechanism. Because of the difficulty in remembering passwords, they were created to address this issue. A memorability vs. guess ability ratio can compare cognitive passwords to other password schemes.

The clues are at the heart of any cognitive password system. Graphics and textual cues, such as photos of faces, newspaper articles, or images can all be used. The use of security questions to aid memory was first suggested as a way to improve recall. This type of authentication was easier to remember than the usual username/password way of authentication. Thus, a cognitive password’s strength is measured by its memorability/guess ability ratio.

Cognitive passwords are introduced, and its application to solve the password problem of being either difficult to remember or easily guessable is suggested. Cognitive passwords are passwords based on personal facts, interests, and beliefs that the user is likely to recall readily. In place of the usual single-password authentication, it is suggested that users and systems have a brief conversation in which they exchange exact answers to a series of rotating questions.

A series of brief responses like this can take the place of a single, lengthy password. An examination into the memorability and guess ability of cognitive passwords has been conducted, and the results have been published. In this study, researchers found that cognitive passwords were simpler to remember than conventional passwords, but even those socially close to the users had a hard time guessing them.

To begin with, the goal of this trade-off was to create a passcode that was simple to remember and encouraged user participation. Passwords are generated using user-selected signals and replies, and the correlative password was born due to this research. Users were expected to know and remember a pre-specified number of questions and answers while using an associative password.

Advances in science in cognitive passwords:

Based on empirical research of biometrics and human cognition, it was established that people should also not be required to know more than four challenging passwords. In cognitive passwords, researchers used the concept of questions to make a series of advancements. Pass faces made use of the unique cognitive capability that comes with recognizing people in a social network.

The notion of four passwords as a fair cognitive expectation was confirmed in subsequent research. It has been established that the unique design and layout of the page have an impact on the memorability and strength of various signals. A visual signal was found to considerably impact the trade-off between memorability and security in later research.

Formulation of a question:

The criterion for selecting questions included generalized answerability, the number of alternative solutions, and the general absence of confusion. For example, “When did you buy your first home?

To prevent ambiguity in queries, such as “How many members of your family do you have? In the process of creating meaningful questions, persuasive and engaging type of questions can prove beneficial criteria.

The overall guess ability of cognitive questions is significantly greater than traditional passwords; however certain problems have been shown to have acceptable memorability to guess ratios on a group average when analyzed individually. Older adults may benefit from visual cues to help them overcome the cognitive decline that comes with ageing. Through tactile interactions, technology can be made more accessible.

We replicate the Baumeister et al. manipulation components to generate cognitive exhaustion in the experiment condition. The participants in the experiment are instructed to repress their thoughts, control their urges, and complete a Strop task that requires a lot of mental work, only in the control condition that the participant’s complete activities that are equivalent to those in the depleting circumstances.

Read also: How Do Use this from Alesis nitro vs dm6?